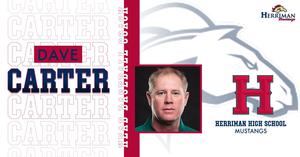 Prior to the 2017 season, Carter shifted his role as the team's pitching coach into a more comprehensive role, covering all facets of the program. Among his many duties, Carter handles the scheduling for UVU as well as coaching third base for the Wolverines.
During his time as the pitching coach at UVU, Carter led the staff to perhaps its most successful season in 2016 when the staff had a collective .280 batting average against, setting a school record. The staff also saw marked improvements in several areas, lowering its team ERA from the prior season by 1.39 runs per game. 2016 also saw the program's most strikeouts as a staff (413) while also lowering the staff's walks by 19 and the batting average against by 37 points.

He has engineered the team's new defensive philosophy, which -- along with the pitching staff's improvement -- helped allow 10 fewer hits in six more games than the season prior. Defensively the team turned 14 more double plays than the year prior while cutting down errors by 22, resulting in a school-record .971 fielding percentage. The 61 double plays ranked eighth in the nation overall.

In his first three seasons, Carter has helped to improve the overall team ERA by nearly four full points including a school-record 4.74 ERA in 2011.

His first full recruiting class included 2011 Great West Conference Pitcher and Newcomer of the Year Jeremy Gendlek, who himself set a school record with a 1.71 ERA in 2011. The top three season ERAs in school history come from the 2011 staff.

Carter has also been key in helping UVU earn ABCA Team Academic Excellence Awards in two of the last three seasons (2017 & 2019), as well as coaching a total of 104 academic all-conference honorees as well as 48 all-conference players during his current tenure at Utah Valley.

Carter began his coaching career in 1994, as a graduate assistant at Southern Utah University before spending two seasons at Southern Idaho, in Twin Falls, Idaho. From there he went to Eastern Utah to coach alongside Madsen before assisting Gardner for four seasons here at UVU.

During his coaching career, Carter has coached several players selected in the Major League Baseball Draft, including former MLB pitchers Willie Eyre and Brandon Duckworth. He also coached 2010 draft pick and former Wolverine Justin Smith, who spent time in the St. Louis Cardinals organization. Carter also coached Danny Beddes, who was selected by the Pittsburgh Pirates in the 15th round of the 2016 draft as well as Paxton Schultz, who became UVU's highest-ever MLB draftee as he was taken in the 14th round by the Brewers in 2019.

Carter was born in Logan, Utah, and graduated from Blackfoot High School in Idaho where he lettered in baseball and basketball. He played collegiately at Southern Idaho from 1986-87 and helped pitch the Golden Eagles to a fourth place finish at the Junior College World Series as a freshman. He finished his college playing career at UNLV where he was part of a team that made it to the NCAA Regionals in each of his seasons in Las Vegas.

After college, Carter signed to play professionally in the Montreal Expos organization. He played for Gate City (Pocatello, Idaho) in the Pioneer League in 1990 and the Erie Sailors in the New York Penn League in 1991. Carter has an associate's degree from Southern Idaho and a bachelor's degree in physical education from Southern Utah (1994). Carter and his wife Shelby have one daughter, Abby, and one son, Cache.